Our mission is to accelerate Australian MS research toward the prevention, better treatments and a cure for MS.

We are MS Australia, Australia’s national multiple sclerosis (MS) not-for-profit organisation that empowers researchers to identify ways to treat, prevent and cure MS, seeks sustained and systemic policy change via advocacy, and acts as the champion for Australia’s community of people affected by MS.

We are the largest Australian not-for-profit organisation dedicated to funding, coordinating, educating and advocating for MS research as part of the worldwide effort to solve MS.

Our sincere belief is that we can find ways to prevent and cure MS. Not only eradicating new diagnoses but enabling symptoms to be treated for those living with MS. Our ultimate, singular goal is to enable a world without MS.

Our influence is broad, as the expert, trusted national voice on MS to government and media, and respected supporter of MS medical research in Australia.

We wouldn’t be able to do what we do without the help of our MS Member Organisations and you, our community. With a collective dedication to funding and progressing vital MS research and advocacy, we can together enhance and enrich our mutual work and help bring a louder voice and dynamism to the MS cause.

We fund researchers, projects and collaborative platforms advancing research into better treatments, preventions and a cure for MS.

We collaborate with national alliances and lobby to the government and decision-makers about key issues for people affected by MS, including affordable and accessible treatments, increased funding for research, protection of legal rights for people with MS, and much more.

Through education we assist, inform, empower and champion the MS community, and grow positive awareness about MS and MS research to the wider community.

Support for our state and territory MS member organisations

We collaborate and represent our state and territory MS Member Organisations to help meet the needs of people affected with MS, their families and carers.

We work with leading global bodies including the Multiple Sclerosis International Federation (MSIF) and International Progressive MS Alliance, to advance the interests of people affected by MS and to support MS organisations around the globe.

To help drive essential MS research and advocacy for the MS community, MS Australia supports, collaborates with and represents our state and territory MS Member Organisations on the national and international stages.

Our four members are:

Our Member Organisations provide the majority of our funding to undertake an agreed international and national MS research and advocacy agenda. They rely on MS Australia to provide the latest evidence-based information to ensure their community of people living with MS, carers, families and the wider community have the best possible information, resources and services in their own jurisdictions.

Our Member Organisations are essential to the work we do at MS Australia. Each member organisation has nominated Directors on the MS Australia Board, Governance, Audit & Risk and National Funding Committees.

View an outline of our activities below. 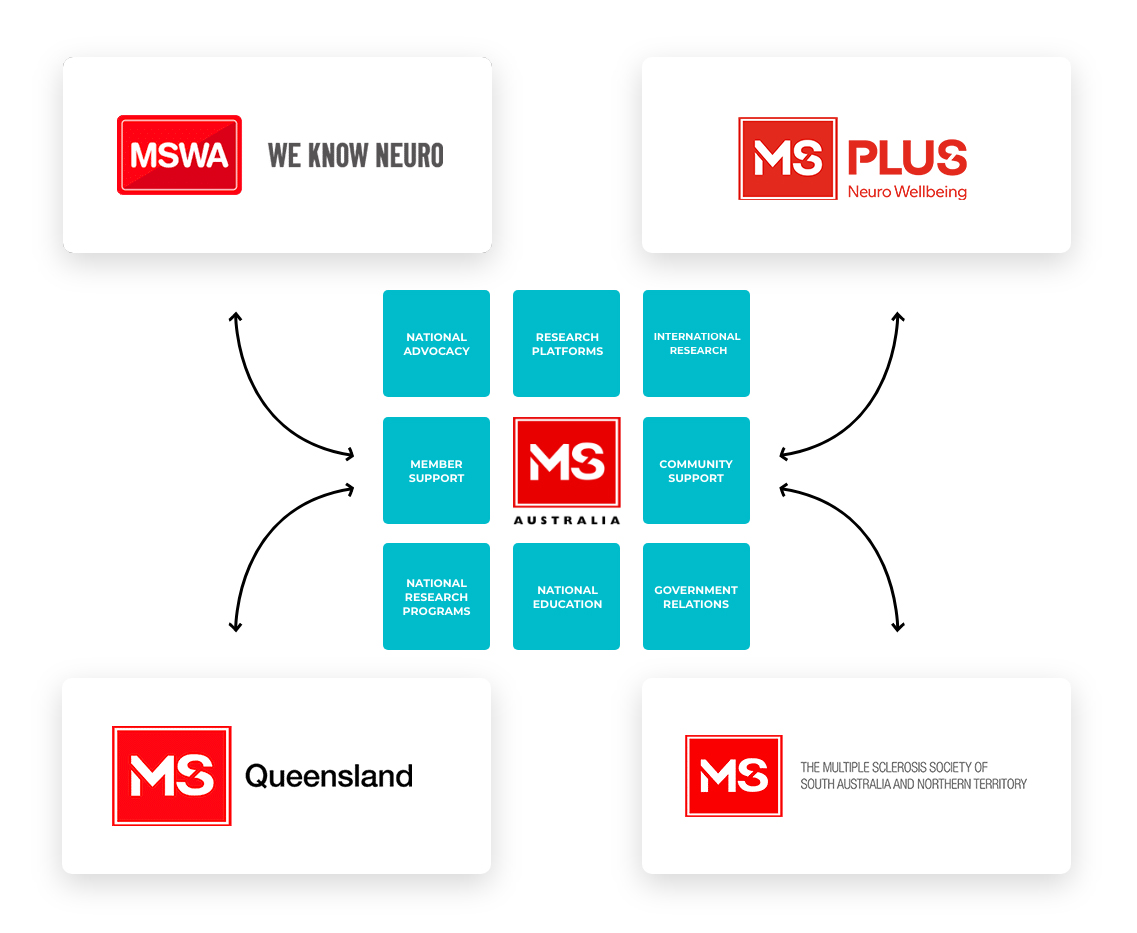 Over $54 million invested into MS research

Successfully advocating for affordable treatment options for people with MS

Our advocacy efforts have helped 15 treatments be listed on the Pharmaceutical Benefits Scheme (PBS), making them more affordable and accessible for people with MS. In 2006, there were only 2 treatments available.

Our funding program supports Australian MS researchers who are working towards better treatments, preventions and a cure for MS. We have funded over 360 research grants from over 59 universities and institutions around Australia.

MS Australia has advocated and sought to improve the lives of people living with or affected by multiple sclerosis (MS) for nearly 50 years.

In 1972, following years of discussion about the need for an organisation to drive awareness, research and support for people with MS, the state MS organisations formed the National Multiple Sclerosis Society of Australia (NMSSA).

In 1999, thanks to the work of (then) Chair John Studdy and after a long period of growth, the National MS Society of Australia changed its name to MS Australia – the organisation we are known as today, providing a national voice for the MS community.

During the 1990s, funding from our MS Member Organisations formed the basis of our research grants program – funding a wide range of Australian MS research projects.

Alongside long-standing systemic advocacy on a range of issues at the national level MS Australia was also advancing research funding.

In 2004 MS Research Australia was established; Kiss Goodbye to MS followed in 2012, its community growing rapidly and in 2019, the virtual fitness and fundraising event, The May 50K, was born. Since its inception, The May 50K has raised over $13.9 million in Australia and $17.3 million globally to accelerate MS research.

In 2021, MS Australia and MS Research Australia amalgamated to become one organisation, to increase the commitment to both research and advocacy to improve the lives of people living with MS. MS Australia is now the largest not-for-profit funder of MS research in the country, with over $47 million invested in vital MS research.

MS Australia continues to advocate across the health, disability and aged care sectors, responding to the impact of government policies and initiatives and seeking to improve all aspects of the lives of people affected by MS.

Through MS Australia, Australians living with and affected by MS are actively and directly influencing the MS research and advocacy agenda – to accelerate research toward better treatments, prevention and ultimately a cure for MS.

View some key milestones in our 50 year journey...

Amount contributed to the Research Fund reached $817,000, to fund a broad range of projects

Inaugural John Studdy Award established, which is still being awarded today to recognise outstanding service and contributions to the MS community

Investment into MS research increased to $2 million, a fivefold increase since the establishment of MS Research Australia

The first Australian MS Clinical Trials Network launched, along with a dedicated website listing all available MS trials across Australia and New Zealand

Vitamin D MS Prevention Clinical Trial (PrevANZ), the largest of its type in the world, recruited participants to bring together evidence on the role of vitamin D in MS

Federal Government established the National Disability Insurance Scheme, after many years of advocacy campaigns by MS Australia and other peak disability organisations

Kiss Goodbye to MS launched The May 50K campaign, with 9,200+ participants raising over $2.1 million to fund vital MS research

MS Australia and MS Research Australia amalgamated to become one organisation, to increase the commitment to MS research via funding and advocacy efforts to improve the lives of people living with MS

As the national peak body for people living with MS, MS Australia is committed to accelerating Australian MS research and advocacy, seeking sustained and systemic policy change, and empowering MS researchers to identify better treatments, preventions and a cure for MS