The Australian and New Zealand MS Genetics Consortium (ANZgene) is a collaboration of neurologists, geneticists, molecular biologists, data scientists and other researchers, from all around Australia and New Zealand who have an interest in understanding how genes contribute to MS. Understanding what genes contribute to a person’s risk of MS, or its progression provides a better understanding of biological mechanisms involved and can assist in the development of medicines.

ANZgene members have worked together since 2007, with MS Australia’s support, to collect DNA samples from people with MS and analyse the samples to identify genes involved in MS risk and progression. As at end of October 2020, ANZgene’s research has been reported in 24 scientific journal articles and, in collaboration with the International MS Genetics Consortium (IMSGC), has contributed to the identification of over 200 MS risk genes and further publications.

The Australian research community has been very active over the years in the field of genetic research into MS. Early in 2007 the MS Gene Bank was formed. The MS Gene Bank collected genetic samples from the people with MS in Australian and pooled the samples to increase researchers’ ability to make discoveries. Samples from New Zealand were added in 2008 and the Australia and New Zealand MS Genetics Consortium (ANZgene) platform was formed. MS Research Australia  supported this endeavour in partnership with the Australian Research Council (ARC) via an ARC Linkage Grant. 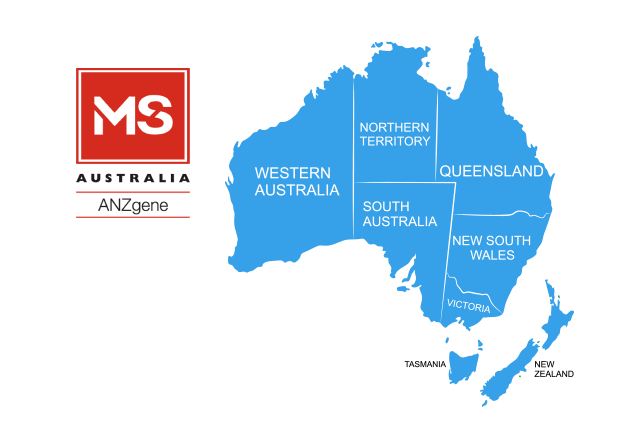 In the mid 2000s, we knew relatively little about the genetics of MS. We knew that immune genes in the human leukocyte antigen (HLA) complex on chromosome 6 were important factors in a person’s risk of developing MS, but this had been known for several decades. At this time, like-minded researchers with an interest in the genetics of MS were starting to come together, both in Australia and internationally, with the aim of pooling resources for larger and more powerful genetics studies. In 2007, MS Research Australia facilitated coming together of research groups from across Australia with the aim of building an MS Gene Bank that could underpin large genetic studies. In 2008, researchers from New Zealand joined the collaboration and so ANZgene was formed. The current MS Gene Bank has DNA samples from over 3,500 people with MS from across Australia and New Zealand and has underpinned ANZgene’s contribution to MS research for more than a decade.

In 2006, prior to the formation of ANZgene, MS Research Australia saw the potential of the research collaborative that was forming and acted as a partner in a Linkage Grant submission to the Australian Research Council. The grant was successful and funded the first ever Australasian genome-wide association scan (GWAS) to look for novel MS risk genes. This study, only the second of its kind completed for MS at the time, identified two new MS risk genes (CD40 and CYPB27B1) and was published in the journal Nature Genetics in 2009 (41(7):824-8). As at October 2020, this landmark paper has been cited 445 times in other research articles, which speaks to the significance of this work. Importantly, this work showed that  CYP27B1, the gene that codes for 25-hydroxyvitamin D3-1-alpha-hydroxylase, an enzyme that converts vitamin D to its active form, is associated with risk of MS, thereby providing a genetic rationale for the link between vitamin D and MS for the first time and also supported findings from Australian epidemiological studies via (AusImmune).

This first ANZgene project provided a launch pad for collaborative interactions with other groups around world, in particular the IMSGC , which thus far has resulted in the identification of over 200 MS risk genes.  In these collaborative studies, ANZgene GWAS data has been made available upon application and also DNA samples to enable bigger and better studies that have shed light on the genes involved in MS. A selection of studies involving ANZgene and its members are listed below.

It took 13 years (1990-2003) to sequence the first human genome at a cost of USD$2.7 billion, but in recent years major technological advances mean we are now in the era of the $1000 genome. This massive reduction (more than 1 million-fold) in DNA sequencing costs, coupled with the speed with which data can be generated for many samples in parallel, means we are now in a position to investigate the role of rare and previously unknown genetic variation in MS, which may have been missed in previous MS GWAS.

ANZgene is at the forefront of this next generation DNA sequencing revolution and is one of the first groups in the world to have access to DNA sequencing data for all 20,000 protein-coding genes (the exome) from over 3000 MS cases and 3,000 controls. This unique whole exome sequence dataset was generated in collaboration with Regeneron Pharmaceuticals, a biotechnology company based in the U.S.A., with the aim of identifying new genes (therapeutic targets) for MS.  A key aim of this study will determine what genes might be driving progressive MS and whether there is overlap with genes involved in other neurological diseases. As progressive MS has significant unmet need from a therapeutic perspective, success in this aspect of the project could have significant benefits for people living with MS.

ANZgene has a strong track record of collaboration. The ANZgene GWAS dataset is potentially accessible to bone fide academic researchers upon application and review by an ANZgene steering committee. DNA samples from the MS Gene Bank may also be used in projects where currently available datasets are not suitable. While DNA samples that comprise the MS Gene Bank are located across geographically distinct “nodes” of ANZgene, the genetic datasets can be accessed via a single point of contact with the ANZgene bioinformatic specialist.

Progress and Publications from The ANZgene Consortium

Many research projects have been made possible by ANZgene through access to data, samples and its member’s expertise. New findings are regularly updated here.

MS Australia and ANZgene members would like to thank the many people with MS who have contributed DNA samples to make this research possible and also The Australian Bone Marrow Donor Registry for access to DNA samples from healthy controls.