Why are risk factors for SPMS important?

There have been studies looking at factors linked with the development of SPMS, but most of these have been limited to certain geographical locations, have only examined factors in the first few years after MS onset, or consist of people who haven’t received treatment. If left untreated, up to 80% of people who have RRMS are at risk of developing SPMS, but we know that with treatment this number is much lower. However, once a person converts to SPMS current treatments are less effective. There is an urgent need to identify risk factors that can predict progression of RRMS to SPMS while taking into account the current landscape of treatments available for MS, and this is what researchers are trying to establish.

What is the latest in this area of research?

A large international study, led by Australian researcher Associate Professor Tomas Kalincik from the University of Melbourne, used data from an international clinical database called MSBase, to look at factors that influence the development of SPMS. This database captures information about treatments and outcomes from thousands of people with MS worldwide. Published in Multiple Sclerosis Journal, the study involved multiple analyses of the demographics, clinical data, as well as magnetic resonance imaging (MRI) data and cerebral spinal fluid (CSF – the fluid surrounding the brain and spinal cord) in people with RRMS.

What do the results show?

These important findings show that the risk of conversion from RRMS to SPMS increases with older age, longer disease duration, greater disability, rapid disability progression and a higher number of relapses in the previous year, and decreases with better recovery from disability. They also show that DMTs may reduce the risk of conversion to SPMS, which is supported by other studies. The average time from MS onset to SPMS has increased from 15 years to 30 years over the last two decades, and this study has confirmed this, highlighting the efficiency of treatment options available to people with MS. These findings will be important for clinicians to help them identify people who are at high risk of developing SPMS at an earlier stage. This means that interventions can be started earlier, reducing people’s chances of ever developing SPMS. 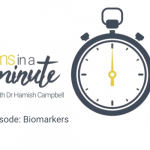 Biomarkers – MS in a minuteVideos