The eyes as possible windows into MS

As the old proverb goes, the eyes are the window to the soul. Whoever penned those words probably had no idea how relevant that statement would be for MS, as the eyes might prove to be an easy non-invasive way to monitor MS progression.

Two studies have been recently published looking at retinal thinning and MS. The first is examining potential changes in the nerve layer when other measures fail to detect disease activity otherwise known as No Evidence of Disease activity (NEDA). NEDA, is often defined as no clinical relapse, no worsening of disabilities, and no new lesions detected on a MRI. In this Italian study, the researchers looked at 72 patients, and carried out a number of tests including MRI, and other clinical measures. They also measured the optical nerve at two separate visits, about 2 years apart.

In this study, people with a greater thinning of the nerve fibre layer at the back of the retina, were more likely to develop new brain lesions which were detected on MRIs. Additionally, the increased thinning was also indicative of worsening disabilities.

Overall, when they looked at both eyes of people with NEDA less thinning was detected than in those that had clear signs of disease activity. This suggests that this could be a simple measure to detect disease activity.

Of concern is that some people with MS can suffer bouts of optic neuritis, where their immune system attacks the nerves associated with the eyes. Previous reports suggest that these attacks can enhance the thinning of these nerves. This could complicate this potential test, leading to a diagnosis of a higher level of disease progression than has actually occurred. However, in this study, the scientists found that previous attacks of optic neuritis didn’t influence the rate of retinal nerve fibre thinning when averaged out over 2 years. This was further confirmed by the second report, which analysed the changes in the retinal nerve fibre layer in the eyes over 5 years. They compared the rate of thinning in people with MS whom had and had not experienced optic neuritis.

This study showed that in people who had experienced attacks of optic neuritis, their retinal nerve fibres were thinner than those from people that hadn’t. However, while optic neuritis can cause temporary periods of accelerated thinning, once the attack stops the overall rate of thinning is unaffected, suggesting that over time the rate of change in the eye can be a marker for what is going on deeper in the brain.

Together these studies suggest that looking at the nerve fibres at the back of the eye could provide a relatively cheap, non-invasive way to measure the level of MS activity going on generally in the brain and other parts of the body. This would help guide therapeutic decisions and help to determine whether the correct treatment is being used. Perhaps it is scientific proof of the adage, the eyes can’t lie. 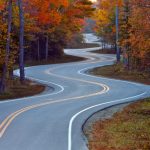 The winding path of progressionNews 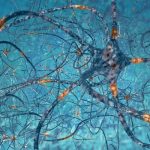 The eyes as possible windows into MS