Researchers have used proteomic profiling to characterise stages and severity of MS, in an attempt to provide new ways of tracking and predicting disease in people with MS. Proteomics techniques allow researchers to study thousands of proteins simultaneously and provide a powerful way to investigate the amount and types of protein present in tissues or fluids and compare different protein profiles in health and disease.

A new study, published in the journal PLoS One, has used protein profiling to examine the earliest stages of MS to see if a diagnosis of MS can be predicted. The researchers, led by Dr Patricia Coyle of Stony Brook University in New York, used high resolution mass spectrometry to characterise proteins in the cerebrospinal fluid of people with clinically isolated syndrome (CIS – where only one attack suggestive of MS has occurred) who eventually went on to be diagnosed with MS. These profiles were compared to people with established MS, other neurological diseases and healthy individuals.

They found the CIS-MS group contained 2820 proteins including 1337 that were only seen in this group, while healthy CSF contained 2586 proteins of which 633 were unique to healthy CSF. When the researchers compared CIS profiles to MS and control profiles, 20 proteins were present in significantly different quantities. Interestingly, 15 of these proteins were grey matter proteins from brain structures such as nerve cells and nerve fibres rather than from myelin. Although MS is primarily a result of white matter damage to myelin, damage to grey matter in the brain has been predicted in early MS by studies using imaging, and this study supports that view. ‘This is a striking finding, because it points to potential new targets for therapies,’ said Dr Coyle, ‘These data suggest to us the grey matter injury is critical and happens early.’

Another study, published in the journal Molecular & Cellular Proteomics, from the KTH Royal Institute of Technology, Sweden, has used proteomic techniques to identify a protein ‘signature’ for MS.

The study identified a protein signature for MS made up of 51 protein fragments. The researchers found that the signature varied subtly according to the type of MS and the severity of disease.  While confirmation in larger patient groups is needed, the lead author, Professor Nilsson, said the signature will allow researchers to ‘study the origin of the disease and its development – how severe it will be and how quickly it evolves over time’.

MS Research Australia coordinates a Proteomics Platform that is also working in this field. Led by Professor Shaun McColl from the University of Adelaide (pictured above), this platform has developed state-of-the-art proteomics technologies for the Australian MS research community at the Adelaide Proteomics Centre and currently supports a number of projects. To read more about the Proteomics Platform please click here.

Pictured above: Professor Shaun McColl and Dr Mark Condina with the Bruker Maldi-Tof/Tof Mass Spectrometer at the Adelaide Proteomics Centre. 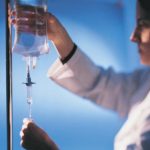