MS results from the damage and loss of myelin, the insulating layer around nerve cells in the brain and spinal cord. The immune system mistakenly attacks myelin, which can be repaired, but this process is often incomplete. The gradual loss of myelin, and subsequent loss of the exposed nerve fibres that are left vulnerable, is thought to be the reason some people with relapsing MS move into the secondary progressive phase of the disease. Current treatments for MS are focused on stopping the immune system from damaging the myelin, and this respite from the immune attack can allow some natural regrowth of myelin. However, none of these therapies directly promote myelin repair.

In long term lesions, myelin repair is, in fact, actively inhibited by the scarring and environment in the lesion. Dr Gonsalvez will investigate a particular signalling pathway that is thought to inhibit myelin repair called the Wnt/B-catenin signalling pathway (a chemical system by which cells communicate with each other). He will identify how this signalling affects the cells which produce myelin and determine whether blocking this pathway will then promote myelin repair. This work has the potential to identify new therapeutic targets that promote myelin regrowth and slow the progression of MS.

Dr Gonsalvez has made excellent progress with investigating the Wnt/B-catenin signalling pathway and its role in production of myelin. He has successfully generated a laboratory model where this biological pathway is blocked in the cells that make myelin (oligodendrocytes) and found that by blocking this cellular pathway myelin production is promoted. These findings suggest that this approach could promote myelin repair within people.

Dr Gonsalvez performed experiments to determine whether blocking the Wnt/B-catenin signalling pathway in oligodendrocyte precursor cells (OPCs), the cells that make oligodendrocytes, affects the number of these cells, or their growth. The initial findings of this have shown that OPCs continue to grow and that myelination is improved. Interestingly, OPCs also play a role in blood brain barrier maintenance and immune response. Dr Gonsalvez is investigating whether OPCs acting on the blood brain barrier maybe leading to the remyelination.

Uncovering the mechanism and the molecules of the Wnt/B-catenin signalling pathway involved in myelination could potentially lead to the development of new therapies that could be used to promote myelin repair and slow the progression of MS.

This work has been presented at national and international conferences and Dr Gonsalvez has won multiple travel grants to allow him to attend these scientific meetings. He has also received a multitude of grants, including from the Department of Anatomy and Neuroscience for a $10,000 microscopy lens which will allow him to accelerate his observations of the myelin repair and has received the University of Melbourne Research Support Grant for $7,800 to retrofit a microscope with equipment that will allow high power imaging of compact myelin. 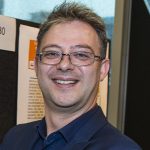