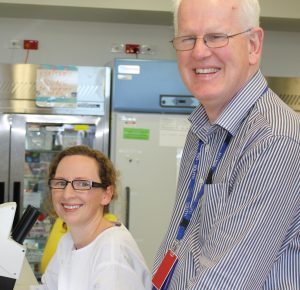 Menzies Institute for Medical Research at the University of Tasmania

In 2017, with the support of the Macquarie Group Foundation, MS Research Australia introduced a new ‘paired’ Fellowship to enable a senior research fellow and a clinician to work together to ‘fast-track’ research breakthroughs and improve outcomes for people living with MS.

In MS, the central nervous system (CNS) is damaged. Current therapies prevent this damage occurring in the first place, but do not repair the damage already caused in MS. Dr Kaylene Young and Professor Bruce Taylor, are working towards new discoveries that may provide treatments to protect and repair the nervous system.

In his clinical research, Professor Taylor has previously discovered a genetic variation that is linked with the development of MS. Using a laboratory model, Dr Young aims to determine how this gene normally functions, and what role it plays in cells. They aim to identify the molecules that this gene interacts with to see if they can find any existing drugs that target it to have an effect on cells isolated from people with MS. Such therapies could protect against MS related injury.

In her laboratory research, Dr Young has found that a form of non-invasive magnetic stimulation can promote myelin growth in the CNS in mice. Dr Young will determine if this magnetic stimulation can also induce myelin growth and repair in laboratory models of MS. Following this, Dr Young will work with Professor Taylor in clinical trials to determine if this treatment is safe for people with MS, and if the treatment is likely to be effective for all people with MS, or for people with specific MS lesions.

Together the pair will draw in other scientist and clinicians to bridge the gap between laboratory findings and clinical practice and vice versa. They will work with their colleagues to establish and evaluate the MS Translation Centre at the Menzies Institute for Medical Research in Tasmania. The Centre aims to progress discoveries along the translational pipeline to accelerate the delivery of new interventions to improve the lives of people with MS.

Associate Professor Young and Professor Taylor have continued to make excellent progress on all aims of their work.

In their first aim, they have established the MS Translation Centre at the Menzies Institute for Medical Research in Tasmania and the MS Research and Translation Network, which aims to accelerate discoveries along the translational pipeline to deliver new interventions for people with MS. The collaborative flagship MS research program at the Menzies Institute for Medical Research recently received its first instalment of the $10 million funding boost from the Federal government under the Medical Research Future Fund (MRFF) which is led by Professor Taylor and includes Associate Professor Young. A MS Consumer Advisory Committee has been established which includes people with MS and carers – this is a valuable reference group for the MS translation research at the Menzies Institute for Medical Research. The committee is in the process of evaluating the plans for MS Stem, the MS stem cell bank that is being established, as well as the method for the transcranial magnetic stimulation safety trial described below. A Scientific Advisory Committee has also been appointed for the program, which has already met twice. The Leadership Team has also been established, and a manager of the collaborative flagship MS research program and communications officer have been appointed. As part of this aim, Associate Professor Young and Professor Taylor have collaborated with the network in the production of a Massive Open Online Course (MOOC) called Understanding MS. Three rounds of the course have taken place so far. It was the most highly ranked course by Class Central in 2019, which lists online courses around the world, based on the thousands of reviews made by users for courses released in 2019.

In his clinical research, Professor Taylor has identified families with an unusually high number of people with MS. His research has identified genetic changes that occur only in the family members who have MS. In the second study of this Paired Fellowship, Associate Professor Young is now working to determine the role of these genetic changes in cell health using cells derived directly from the people with MS. So far, she has identified a genetic change present in one of the families with MS. Using cell-based and laboratory models, she has discovered that this genetic change results in motor coordination problems and memory problems in laboratory models, and she has narrowed down the cause of these changes. A second part of this study has involved generating stem cells and then the myelin-producing cells affected in MS directly from blood cells of these family members. These cells are being used to investigate the effects of these genetic changes and will form part of MS Stem.

As part of their third aim, Associate Professor Young and Professor Taylor are continuing to work on the pre-clinical and clinical studies of non-invasive transcranial magnetic stimulation to promote myelin growth. They are currently in the process of analysing the effect of this on different pre-clinical models of demyelination. They are continuing to work on the clinical trial to determine if this treatment is safe and effective for people with MS. The stimulation method has been locked in and the clinical trial procedure has been developed. Associate Professor Young and Professor Taylor have collaborated with Professor Michael Barnett, a neurologist based at the Royal Prince Alfred Hospital, to develop the MRI procedure as a read out for myelination and remyelination. After refinements and test runs, they now have the capacity to analyse the MRI data from the clinical trial. This will allow them to have important preliminary data to be able to plan for the second phase of the trial. 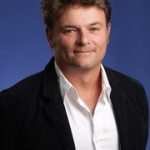