It remains unclear to what extent damage to the nerves or damage to their protective sheath (myelin) contributes to the overall MS disease progression.  In a recent report1 evidence was supplied demonstrating that the death of the cells that produce myelin (oligodendrocytes) occurs early in MS lesion formation and that it would be the primary event in the appearance of MS.  The use of well established animal models will make it possible to investigate the fate of the oligodendrocytes during early MS diseases progression.  While currently available animal models do not allow for the study of the processes that initiate MS, the observations by Prineas & Barnett1 does highlight the need to determine whether it is oligodendrocytes and/or myelin that are targets of the immune attack, and consequently may point to different strategies for neuroprotection.

During his scholarship Mr Ramp developed a method to quantitate changes in the brain of a laboratory model. This work was presented at national conferences and a manuscript is currently being written.

Mr Ramp also measured large molecule transfer across the blood brain barrier, which is thought to precede the inflammation and other CNS damage that causes MS. 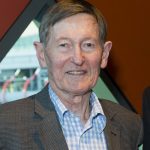 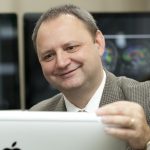