MS Australia is delighted to be part of a team including academic specialists, experts and other disease-based organisations to look at the accessibility and policy around stem cell-based therapies in Australia.

The project has been provided close to $800,000 in funding from the Medical Research Future Fund (MRFF). The MRRF is a long-term government investment fund set up to support Australian health and medical research. It aims to transform healthcare and to improve lives, build the economy and maintain health through medical research and innovation.

There are a range of cell-based therapies in different stages of development or use in Australia. Cell-based therapies are roughly defined as a therapy where live cells are injected or implanted into an individual as medicine or to have a medicinal effect on that individual. Depending on the therapy and the disease it is being used to treat, there are three ways to access cell-based treatments in Australia. These are via standard clinical practice, clinical trials or experimental stages (treatments that are not considered standard clinical practice but outside of clinical trials).

For example, people with certain types of cancers can access autologous haemopoietic stem cell transplants (AHSCT) through standard clinical practice. However, for some conditions, accessing AHSCT happens via experimental stages or clinical trials. For people with MS, access in Australia is through experimental stages, while some international bodies consider AHSCT standard clinical practice for special categories of patients, like those that might have failed other therapies (otherwise known as a second line therapy).

However, there isn’t a standard approach to how people with different diseases access different cell therapies, and this seems to vary by disease type and cell therapy. In fact, some treatments can be offered both as a clinical trial and as an experimental stage, leading to confusion and inequitable access.

What are the problems with the existing regulation of stem cell-based therapies?

In addition to hospital-based therapies such as AHSCT, there are other “stem cell” therapies being offered by a range of providers. Some of these providers are pedalling therapies with little evidence of benefit, taking advantage of vulnerable people by charging large sums of money as well as potentially causing harm due to loopholes in regulations. As a result, there is a need for more control over how stem cell-based therapies are accessed. Also, there is variation in how stem cell-based therapies are regulated. For AHSCT, collection, storage, administration, access, and transition from clinical trial to practice are monitored by three separate professional bodies, with AHSCT only one of many different cell therapies which are being developed in Australia.

There are also gaps and inconsistencies in the rules, regulations and decisions of when stem cell-based therapies may be offered through clinical trials, experimental stages or standard practice. Hospitals are regulated by state governments which is very complex, and special access schemes are regulated by the Federal government. This mix of oversight leads to further confusion.

There is also debate on what level of evidence is required for a cell therapy to move from experimental stage (i.e. clinical trial or experimental stage) to standard practice, with some people arguing that even at early stages healthcare professionals should have the ability to provide such treatments. It is also unclear whether it is appropriate to charge consumers for access to unproven treatments and who should bear the costs of side effects and complications.

Due to all of this, consumers may be poorly informed or misunderstand their options for accessing stem cell-based therapies, they may lose trust in systems of governance, healthcare and research, and those with the loudest voice or deepest pockets tend to have the most influence.

How will this project address these issues and what does this mean for people with MS?

This project will address these issues by generating guidelines and recommendations for determining when access to stem cell-based therapies should be through clinical trials, when they should be offered as a type of experimental stage and when they should be offered as standard clinical practice. It will also help consumers understand their options to accessing these therapies. This project will engage consumers, clinicians, researchers and policymakers so that all relevant perspectives are addressed.

This partnership builds on MS Australia’s commitment to AHSCT and cell therapies, and will hopefully bring us a step closer towards expanding the MS treatment landscape by providing evidence to improve community trust, acceptance and adoption of cell therapies including AHSCT. 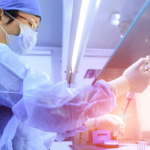