Kiss Goodbye to MS on the world’s stage

Many countries all over the world face the same problem as Australia: the prospect of an even smaller amount of funding being allocated to essential MS research, across numerous sectors.

With Kiss Goodbye to MS experiencing continued growth and success for MS Research Australia, the campaign is now set to become a global initiative. Initially an awareness campaign, the enthusiasm and desire to ‘do more’ shown by our community saw the growth of Kiss Goodbye to MS into a fundraising initiative, with now all nett money raised funding critical MS research initiatives around Australia.

The success of the campaign has not gone unnoticed, with the MS International Federation (MSIF) and associated countries taking a keen interest in Kiss Goodbye to MS.

MSIF have officially adopted Kiss Goodbye to MS as an important initiative in the federation’s global fundraising strategy. They have been drawn to the positivity and empowerment of Kiss Goodbye to MS and the hope that it brings to people who are living with MS. It is particularly popular with younger people affected in some way by MS and the age range 25-55, many of whom have not played an active part in fundraising for MS before.

‘From the day I first joined MSIF, the Kiss Goodbye to MS campaign stood out as one of the most exciting things happening around the world. Whenever we’ve talked to our members and people involved in MS there has been a real excitement about it, and it is now going to be our first major international fundraising campaign,’ said Luke Thomas, Head of International Fundraising, MSIF and based in London.

MSIF is a unique network of MS organisations from around the world that exists to help fight for a world free of MS. In 2016 member countries will be encouraged to adopt Kiss Goodbye to MS in their own organisations and tailor the campaign to promote MS awareness and fundraising worldwide.

‘People love this campaign because it’s got so much energy and they can get involved in any way they like. The success of the campaign in Australia is a sign of great things to come for all of the countries coming on board in 2016 and 2017,’ Mr Thomas said.

The introduction of Kiss Goodbye to MS internationally has received a very positive response with eight countries committing to implement the campaign next year. Among those countries are New Zealand, Denmark, Ireland, USA, Sweden, Argentina, Mexico and France. Additionally, 14 other countries are considering this opportunity for a 2017 roll-out.

‘Ongoing funding for MS research is paramount to further understand the disease. While research in this sector has come a long way over the last 10 years, there is still a way to go. Research projects rely on funding which is facilitated through campaigns such as Kiss Goodbye to MS’ said US-based, Mr Weyman Johnson III, President MSIF.

‘We are proud to see Kiss Goodbye to MS reach new heights. We hope that this will facilitate the growth of MS research funding not only in Australia but worldwide. We will work closely with the countries adopting the campaign to ensure a smooth collaboration, maximising this exciting opportunity’ said Richelle King, Kiss Goodbye to MS Campaign Manager.

Of course, there will be no changes to Kiss Goodbye to MS in Australia. All of the net funds raised will go to funding critical MS research in Australia. 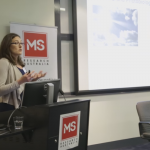 Bringing research closer to the communityNews Kiss Goodbye to MS on the world’s stage