Multiple sclerosis (MS) is on the rise with new estimations showing 25,600* Australians now live with the condition which is an increase of 4,400 over the past 8 years, with on average about 10 Australians being diagnosed with MS every week. But while the prevalence is increasing, MS remains firmly under our radar with only 4 out of 10 Australians ranking MS a community health priority.

These early findings form part of a MS Report Card published today by MS Research Australia, to mark the launch of Kiss Goodbye to MS month in May. It suggests the cost of MS to the community is now a staggering $1.9 billion, covering direct costs including treatment, healthcare and disability services, and indirect costs due to lost productivity (reduced unemployment, informal unpaid care). Australians, however, are still ranking MS only 8th on a health priority list behind mental health, cancer, diabetes, heart health, dementia, motor neurone disease and Parkinson’s disease.

MS is an incurable, chronic, often debilitating inflammatory neurological condition where the body’s immune system attacks itself and damages the protective insulation surrounding the nerve fibres (myelin) in the brain and spinal cord.

MS affects more young people than any other acquired chronic neurological disease often striking in the prime of life. The average age of diagnosis is just 30 years old and three out of four people diagnosed are female. MS can lead to a decrease in quality of life equivalent to late stage cancer or a major stroke.

The MS Report Card brings together calculations from researchers at the Menzies Institute of Medical Research in Tasmania and community insights gathered in mid-April via YouGov Galaxy among 1,056 Australian adults nationally. The research confirms a staggering 7 million Australians know someone diagnosed with MS and 2.7 million have a close friend, family member or relative with MS. It also confirms our understanding of MS remains low:

Of most concern, even with many Australians having close interactions with those living with MS, half of Australians (49%) believe an MS diagnosis should be kept private or only shared with family/friends and some work colleagues.

“MS remains a challenging condition in our community placing a very significant toll on younger Australians where it is most frequently diagnosed. It also brings a heavy burden in cost to manage it. We really need to ensure it is higher on the community radar and receives the attention it needs through research efforts to better understand and manage this complex disease,” says Dr Matthew Miles, CEO MS Research Australia.

We are now at a tipping point with research which is taking us close to finding the cure for MS. We believe we can solve the puzzle of MS in our lifetime – so now is the time to really forge ahead and accelerate our research efforts rather than let them keep ticking along at the same pace,” adds Dr Miles.

Leading Australian cricketer, Jemma Barsby, is living with MS, “The hardest thing about MS is that it affects me differently every day, and everyone’s symptoms are unique. People think it should define me and stop me – but they’re misinformed.”

To ensure Australia is able to continue its significant research efforts in the fight against MS, 16 internationally recognised research institutions across Australia will step forward from their labs and into the social media spotlight on Tuesday 1st May swapping traditional white lab coats to red ones. For the first time, these scientists will be showcasing their research efforts directly to the Australian public via videos and social posts via the hashtag #RedLabCoatDay. Red Lab Coat Day not only highlights the exceptional talent we have in this country but also gives the community the opportunity to say thank you.

Overwhelmingly Australians believe research funding into chronic and disabling diseases should focus on diseases affecting people in their 20-40s (40%) – exactly the prime of life when MS is most commonly diagnosed – and younger Australians from 0- 20 years old. They are less supportive of research into chronic diseases afflicting older generations.

They also want MS research to focus efforts on finding a cure (32%), followed by wanting to uncover the means to prevent MS (21%), while 19% want to find the cause.

Kiss Goodbye to MS is a unique national initiative by MS Research Australia focussed on raising critical funds for Australian MS research. It aims to raise $1.3 million in 2018.

* MS Report Card: Menzies Institute for Medical Research – Findings and Research Study
The new incidence and burden data are based on initial calculations generated by the Menzies Institute for Medical Research in Hobart, commissioned by MS Research Australia with generous support from Merck Serono Australia. The national research study was conducted via the YouGov Galaxy Online Omnibus 12-15 April 2018 among 1056 Australians 18+. The data was weighted by age, gender and region to reflect the latest ABS population estimates. 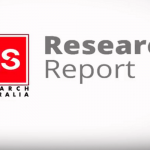 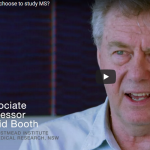 Why did you choose to study MS?Videos