The number of people living with MS and other autoimmune disorders has been increasing. Many reasons for this have been suggested, but one theory, known at the ‘hygiene hypothesis’ is that humans evolved to adapt to, and live with, infections with certain organisms. This close relationship, over time, has led to certain benefits for us, the hosts. This includes, for example, an effect on the immune system that makes it more ‘calm’ or tolerant and less likely to attack itself. Now in our very clean, modern lifestyles, this relationship has been lost, increasing the likelihood of autoimmune diseases.

Helminths, or parasitic worms, have been infecting humans for a long time and deliberate infection with helminth worms is being explored as a treatment for a range of autoimmune disorders. However, there are risks of contamination, lack of knowledge of treatment dose and the possibility of side effects and nutritional deficiencies due over-infestation.

Dr Sheila Donnelly and her colleagues have been investigating these infections and what molecules the worms produce to see whether the benefits could be harnessed without the risks of infection. With a MS Research Australia project grant supported by the MS Society of WA they have recently published results from these investigations in the journal Scientific Reports. In this study Dr Donnelly’s team have discovered a particular molecule, called FhHDM-1 that may help suppress the immune responses involved in the development of MS.

Dr Donnelly and her colleagues have received media attention for this exciting discovery which may prove beneficial for people with MS.

Dr Donnelly and her team looked at the effects of the molecule FhHDM-1 in a laboratory model of MS. When mice were treated with FhHDM-1 for two weeks they had fewer relapses, with 20% being relapse free. They also had less inflammation and demyelination in the CNS, than those mice that did not receive treatment.

The researchers went on to investigate how this was happening. They found that FhHDM-1 bound to macrophages, a specific type of immune cell. Macrophages release signals that tell other cells of the immune system what to do. In this study, the researchers found that macrophages that responded to this molecule from worms were less able to send out the signals that encouraged inflammation.

This pre-clinical study is the beginning of work that may provide a new therapy for MS. This potential therapy has many benefits over infection with whole live worms, allowing the production of synthetic molecules that can be manufactured in a sterile environment, with a more carefully controlled therapeutic response. Feeling the heat with MSNews 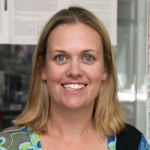