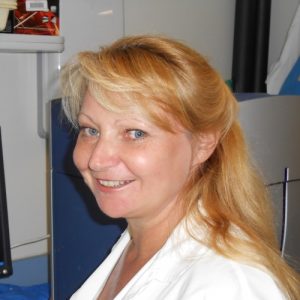 After a worldwide effort, a large number of genetic risk factors have been identified for MS. Many of these were small changes in the genetic code (DNA) and are called single nucleotide polymorphisms (SNPs). Most of these changes do not result in alterations in the product synthesised from the gene, but may affect the regulation of gene activity.

This project will attempt to identify how some of these genes may contribute to the risk of developing MS. This project will examine three candidate genes in greater detail. The first phase will take specific types of immune cell, known as natural killer cells and monocytes, from people with MS and people without the disease.

The natural killer cells and monocytes will be grown in the laboratory and used to make comparisons between diseased and healthy cells. Dr Jordan will also compare different versions of each gene and different levels of gene activity in the cells to determine what effect this has on cell function. The second phase will use animal models with specific versions of each gene to test how this affects susceptibility to an MS-like illness in the mice.

Three genes forming the focus of this project were initially identified from a smaller sample of people with and without relapsing remitting MS. Since this initial analysis, the data sample size has been increased to 110 healthy controls and 80 people with untreated relapsing remitting MS (RRMS), forming one of the largest genetic datasets derived from the immune system of people with MS. Analysis of this data set, revealed an additional gene of interest. Dr Jordan used a combination of techniques to study the expression of these and other genes. Combining the data from four different techniques known as microarray, SNP, expression quantitative trait locus (eQTL) and RNAseq analyses, Dr Jordan looked for changes in the activity of these four genes in different parts of the immune system in people with and without RRMS. These analyses have shown that the activity of these genes is different in people with MS and that different types of immune cells express these genes at differing levels. This illustrates the complex nature of MS genetics and immunology.

In human cells grown in the laboratory, 12 genes were modified individually and in combination to determine if they affected the activity of other MS risk related genes. In a specific subtype of immune cells, the MS related genes were active at increased levels. To confirm these finding in a whole organism, a laboratory model of MS was used. Dr Jordan’s team made genetic changes in the laboratory models, turning each of the four genes off individually. Dr Jordan has revealed a range of effects of these genes in immune cells. Animals without a functional Themis gene for example, displayed a milder form of the MS-like disease, and animals with an Rgs1 deficiency displayed a modified immune system but no observable difference in disease outcome. The two remaining genes made no observable difference to the immune system or the MS-like disease. Dr Jordan was able to achieve this both in the entire body of the mice, and in selected tissues, which helped her determine the effect of the gene in different body systems. These results demonstrate how MS is a complicated disease with the expression of many genes having a small but key role in the onset of the disease through subtle changes to immune cell function. Further analyses are currently underway to more thoroughly analyse these genes and the effect of turning these genes off in combination. Identifying how MS genes affect specific immune cells will pave the way for developing better predictive and diagnostic tools and lead to new therapies for MS.

This fellowship has allowed Dr Jordan to present her work at national and international conferences and meetings, and to develop a collaboration with other researchers in Townsville to determine the effect of latitude (another known MS risk factor) on these genes. This work also formed the basis of a MS Research Australia Project Grant, which will enable Dr Jordan’s team to continue studying these genes and their effect in combination.