MS therapies can each have multiple effects on the immune system, in addition to the effect for which they were originally used in MS.

Understanding these diverse effects can be very useful for several reasons. It can help us understand why a medication is effective, the timeframe of its effects, and potentially, some of the side effects.

This knowledge can also help in the development of future drug candidates, and in our understanding of how “tweaking” specific immune functions can help treat MS.

How does cladribine work?

Cladribine (Mavenclad) is used to treat relapsing remitting MS to reduce inflammation in the brain and spinal cord. Cladribine is known to selectively remove immune cells from circulation by accumulating inside the cells and triggering programmed cell death.

By reducing the number of destructive immune cells in circulation, cladribine may slow down or stop the mistaken immune cell attack on the brain and spinal cord in MS.

Cladribine is provided as two treatment courses over two years, with each treatment consisting of two weeks. However, cladribine has lasting clinical benefits, long after exposure to the therapy.

This suggests that there are additional beneficial effects of this drug. Researchers have already demonstrated that cladribine also makes T cells, a type of immune cell, less inflammatory (less likely to cause damage to the brain tissue).

However, in a new study funded by MS Australia, Dr Felix Marsh-Wakefield and Professor Georges Grau, along with their team from the University of Sydney, examined another possibility — that cladribine might hamper the entry of damaging immune cells into the brain.

What was the aim of the study?

In order for immune cells to damage the brain and spinal cord in MS, they must first attach to the inside walls of blood vessels in the brain and then pass through the blood vessel wall to enter into the brain tissue. The aim of the study was to see if cladribine affects their ability to do this.

The researchers developed an elegant model of brain blood vessels in the laboratory by growing layers of specialised cells that line the inside of the blood vessels of the brain on a thin collagen-coated membrane.

They mimicked the inflammatory environment of MS by growing these cell layers in brain inflammatory molecules. Finally, they took human blood immune cells and measured whether they were able to cross through this layer.

In this study published in the Journal of Clinical Medicine, the team compared blood immune cells from people with MS — either treated with cladribine or untreated — and people without MS.

Under cladribine treatment, T cells of people with MS were less able to cross the blood vessel wall in the laboratory model, suggesting that cladribine hinders the movement of T cells into the brain. This is a new finding and reveals another potential mechanism of action of cladribine in MS.

This is of particular interest because natalizumab (Tysabri) is another highly effective MS drug that prevents the migration of immune cells into the brain. It does this by blocking a molecule on immune cells that allows them to attach to blood vessel walls, called CD49d.

The researchers tested whether cladribine may be working the same way but found that it does NOT affect the levels of CD49d. Instead, they found that cladribine reduces the levels of another “attaching molecule” on the immune cells, called CD38, which may help to explain their reduced ability to cross the blood vessel wall into the brain.

Cladribine is an effective treatment for relapsing-remitting MS and seems to “reset” the immune system to some extent over a long period. This study has unveiled a potential new mechanism by which this may be occurring. 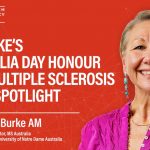