What drives myelin damage in MS?

In multiple sclerosis (MS), the protective myelin sheath around the nerves becomes the target of a misdirected attack by a person’s own immune system. What sets off this process is unknown, nor is the order of very early events that ultimately lead to the damage of the myelin sheath or an ‘MS lesion’. Understanding these early events could be key to uncovering the cause of MS.

A new study published in the Journal of Neuropathology and Experimental Neurology by MS Australia-funded researchers, Professor John Prineas and Dr John Parratt at the University of Sydney, examined brain tissue from people within days to weeks of a new MS lesion forming. Using microscopic examination, they looked at which immune cells were the initial players in the immune attack, where they were coming from, and how they interacted with the myelin sheath.

Which immune cells damage the myelin and where do they come from?

Myelin surrounds nerve cells to insulate the cells and help conduct messages in the central nervous system, consisting of lipid-rich or fatty substances. In studies as early as the 1800s, researchers studying MS brain tissue noticed that in areas of myelin damage in the brain, there were ‘fat granule cells’, later shown to contain the fatty breakdown products of myelin. Further work in laboratory models showed that these cells, called macrophages, were responsible for damaging the myelin sheath by engulfing or ingesting sections of myelin. Where these macrophages come from has still been in question: do they develop from brain immune cells (called microglia), or from blood immune cells (called monocytes) that infiltrate the brain in MS?

What triggers the damage to myelin?

The question of what initially triggers myelin damage in MS is also still unresolved. The myelin sheath is made from the fatty membrane of cells called oligodendrocytes, which wrap themselves around the nerve. Some scientists have seen a loss of oligodendrocytes in newly forming MS lesions. This has led to the idea that the initial event in the onset of MS may be the death of oligodendrocytes and that macrophages come in to simply ‘clean up’ myelin that is already degrading.  In contrast, other scientists found that there was no oligodendrocyte loss in two-thirds of MS cases but that damaged myelin sheaths were coated in molecules that encourage an immune attack. These scientists concluded that a targeted immune attack by macrophages was the initial event driving myelin damage rather than oligodendrocyte death.

The overall aim of this project was to understand the very early processes involved in myelin damage in MS. The researchers compared brain tissue from early MS cases with long-term MS cases and other neurological diseases. The first part of the study found that in newly forming MS lesions, oligodendrocytes, myelin, and another type of supporting cell called astrocytes, are destroyed by macrophages. This new study of the same group of participants focused specifically on the macrophages:

The researchers found that a major source of macrophages in MS lesions came from monocytes in the blood. However, it seems that the brain immune cells, the microglia, are also involved in developing the myelin-destroying macrophages. Further work is needed to understand exactly how monocytes and microglia might work together to form this macrophage, unleashing so much damage to the myelin.

Looking at stages of development of the macrophage from other cells, the researchers found 20 different cell subtypes in and around the MS lesion (including two subtypes not previously seen in MS) that varied between early and older MS lesions. The markers used to identify these cell subtypes give clues as to their function in the MS lesion: whether they have ‘engulfing function’ to clean up at the site of damage, or have stopped engulfing, are full of digested myelin, and are ready to exit the lesion.

In most early MS cases, the researchers found monocytes ‘plugging’ or blocking the capillaries (smallest blood vessels) in the brain’s grey matter. In early MS, the monocyte plugs did not seem to be associated with any tissue damage. However, in more chronic disease cases, monocyte plugs were observed with abnormalities in the blood vessels (seen in one case of progressive MS) and a case with sudden cognitive problems (one case of neuromyelitis optica). Further work is needed to determine whether plugging of brain capillaries by monocytes can cause dysfunction in the brain’s grey matter in MS or other neurological diseases.

What did the researchers conclude?

In older MS lesions, researchers found antibody-producing cells that could potentially drive a specific immune attack on myelin, but in very early MS lesions they found none of these cells. In early MS lesions, they did find degenerating oligodendrocytes, astrocytes and myelin that could be stimulating a non-specific ‘clean-up’ of the lesion by macrophages. These findings fit with a proposed model where oligodendrocyte and astrocyte death, rather than a specific immune attack on myelin, is the earlier event driving the formation of the MS lesion. Further work is needed to fully understand the role of the specific and non-specific immune arms in triggering MS. This work gives a greater understanding of the earliest events in the lesion, hopefully bringing us a step closer to discovering the cause of MS and the development of new therapies.

MS researchers have investigated whether a naturally occurring molecule, which some DMTs mimic, has the capacity to promote myelin repair.
Read more 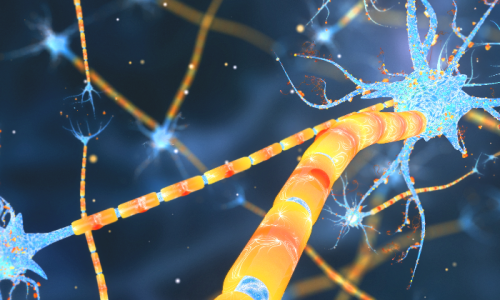 New research into myelin repair in MS has found that switching off a gene can improve myelin replacement in laboratory models of MS.
Read more 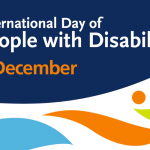 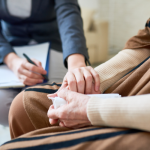 What drives myelin damage in MS?