Over 200 genes have been linked to an increased risk of developing MS. However, we do not know which genes are involved in the progression of disability in MS, much less how these genes interact with environmental factors that are known to affect the MS clinical course.

The aim of this project was to use large data sets from around the world to systematically investigate effects of genes on both risk of developing MS and on how the disease progresses.

A better understanding of the genetics of MS could provide insights into the disease processes in MS, towards improved treatments.

Genetics and the immune response to MS-associated viruses

The first aim of this study was to find genes that affect immune response to two viruses that increase the risk of MS. Through international collaborations, Dr Zhou conducted a “genome-wide association study (GWAS)” for Epstein Barr Virus (EBV) and Human Herpesvirus 6 (HHV-6), which are risk factors for the development of MS. This type of study involves searching all genes simultaneously for small genetic variations that may help determine, in this case, a person’s immune response to EBV and HHV-6 infection.  Dr Zhou has completed the analysis for EBV and HHV6 levels in 11,079 twin family samples as well as for EBV levels in approximately 9,000 samples in a UK biobank. A group at the University of Bristol are continuing the analysis of approximately 11,000 people with measurements of EBV and HHV6 over a long period of time. Dr Zhou’s work is also examining the role of EBV and HHV-6 in causing MS, and research manuscript is in preparation describing the results of this work.

Dr Zhou has established a collaboration at the Genome Institute of Singapore and Australian Animal Health Laboratory to perform large-scale EBV studies in the Tasmanian population, and has established a rapid, cost-effective technique that can be used by the clinical laboratories to detect EBV.

Genetics and sex differences in the incidence of MS

The next part of the project focussed on genes located on the X chromosome. Females have two X chromosomes, and males have only one. By studying this chromosome, there is potential to discover why more females than males develop MS and also to provide new targets for future therapies. As part of an MS Research Australia funded Ian Ballard Travel Award, Dr Zhou travelled to Boston for collaborations at Brigham and Women’s Hospital, and the Broad Institute of MIT and Harvard. During this time, he developed a method to analyse the genetic differences between males and females. Using this method, he has analysed the X chromosome of 35,588 people with MS and 34,723 people without MS, which is the largest analysis of this type ever conducted. Dr Zhou will combine his findings with a similar X chromosome analysis conducted by the International MS Genetics Consortium and will publish these findings in due course.

Genetics and the course of disease in MS

Dr Zhou also used a genome-wide analysis to investigate whether genetic variations can help predict what a person’s clinical course of MS will be like. For this work, he co-supervised a PhD student from Belgium, Marijne Vandebergh, at the Menzies Institute for Medical Research in Tasmania. Using a group of people from Belgium the research team found that a rare genetic variant in a gene called WNT9B was associated with a higher risk of MS relapses. People who carry this rare genetic variant have a shorter time to relapse compared to people who do not carry the variant. The team repeated this finding in a second group of people, suggesting it is a genuine genetic effect (i.e. not caused by chance).  This work was published in the prestigious journal Annals of Neurology. Going forward, Dr Zhou plans to determine the functions of these genetic variations by looking at whether they cause changes to gene activity during MS progression using large datasets.

Dr Zhou also investigated the biological effect of genetic variants that increase MS risk. Our genes are like a code or a recipe for making proteins in the cell. Every cell contains the entire genetic code, but not all possible proteins are made in every cell. Instead, there are chemical modifications that can turn certain genes on or off according to what is needed in that cell type. Dr Zhou studied the effect of 2 genetic variants that increase the risk of MS. He found that in blood cells, these variants change the chemical switches and the amount of protein that will be copied from their respective gene “code”. For one of the genetic variants, there was also a change in the amount of its respective protein to be made in brain tissue.  These subtle changes in levels of proteins made in the blood and the brain could be the key to understanding how these gene variants change the risk of MS.  This work has been published in Multiple Sclerosis Journal.

Dr Zhou has also developed a mathematical formula using clinical, genetic and environmental risk factors to predict the clinical course of MS and response to MS treatments at the time of diagnosis. Testing has proven this to be a good predictor of the likelihood of disease worsening in groups of people.  It is hope that this formula will provide guidance for treatment choices for the individual, and for selecting appropriate groups to participate in clinical trials. This manuscript is currently under review for publication.

One key aim of MS Research Australia post-doctoral fellowships is to support the career path of young scientists to keep working on exploring the knowledge gaps we have about MS. With support of this MS Research Australia Postdoctoral Fellowship, Dr Zhou has been successful in securing a competitive National Health and Medical Research Council (NHMRC) Emerging Leadership Investigator Grant ($562,013) to further his research for the next 5 years. He has developed an independent research program by leading multiple large international collaborations. The program has two main themes: 1) exploring the genetic makeup of MS; and 2) translation of the findings that could lead to early diagnosis, better treatments and prevention of MS disease progression into clinical practice to help people with MS as soon as possible. 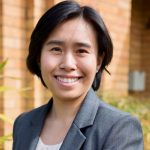 Predicting and monitoring the long term effects of MS