MS is a complex disorder of unknown cause, however, a number of genetic and environmental factors are known to increase susceptibility to MS. A recent international genome wide analysis of thousands of people with MS, compared to healthy control individuals, has now identified 57 genetic variations associated with MS susceptibility. This study, which involved the Australian New Zealand consortium for MS genetics research (ANZgene) was published in the top scientific journal Nature in 2011.

The function of many of the identified genes is unknown; the goal now is to find out why these genes contribute to MS and whether they could be the targets for new drugs. In this project Dr Batten and Associate Professor Booth will focus on a promising candidate gene, GPR65.

What GPR65 does in cells is still poorly understood, however, it is thought to interact with psychosine, a molecule that is known to cause the development of another demyelinating neurological disorder called Krabbe’s disease. This information, together with its genetic association with MS suggests that GPR65 could be an important gene in MS development.

Powerful laboratory tools are currently available that will enable the team to delve deeper to understand the function of GPR65 and test its role in MS.

The team will investigate the molecular signalling pathways involving GPR65 and determine where in the body the gene is active. Using mouse models they will probe its role in immune cell function, both at a basic level and in the context of the Experimental Autoimmune Encephalytis (EAE) model of demyelinating disease.

This study will help to reveal the basis for the genetic association of GPR65 with MS and may provide novel insights into the development of the disease, enabling new therapeutic approaches.

Dr Batten has successfully completed this project and has pushed forward with further functional analyses. The project has revealed important preliminary information about the function of GPR65, and forms a solid basis for the development of future grant applications and scientific manuscripts. The results have been presented at the 2012 Australasian Society for Immunology Annual General Meeting, Melbourne, and at the 2013 Keystone Symposium on Autoimmunity, Whistler, Canada. 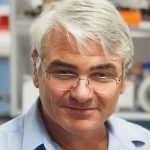