Researchers from the Florey Institute of Neuroscience and Mental Health in Melbourne have revealed exciting new possibilities for the development of therapies to promote the repair of myelin in MS.

They have shown that a specialised type of stem cell present in adult brains makes a significant contribution to the repair of myelin in mice with MS-like disease.

The results, published in the Journal of Neuroscience in October, are the culmination of several years of meticulous research by the team led by Dr Tobias Merson.

Dr Merson was the recipient of a prestigious Betty Cuthbert Postdoctoral Fellowship, co-funded by the National Health and Medical Research Council (NHMRC) and MS Research Australia from 2007-2010 as well as a Project Grant in 2009. Since then, Dr Merson has gone on to win further funding from bodies such as the NHMRC and Stem Cells Australia and now leads a growing team of MS researchers.

Neural Precursor Cells (NPCs) are specialised stem cells that reside in a small area of the adult brain. NPCs have been shown to be capable of generating new neurons and other support cells of the brain – their original discovery overturned the long-held belief that there were no stem cells in the brain that could aid its repair.

Following some early evidence that NPCs may also be involved in myelin repair, Dr Merson and his team set out to investigate just how important these cells were in myelin repair and how they might be stimulated to enhance repair in diseases such as MS.

The team used elegant genetic techniques to label the NPCs with coloured markers so that they could track their movements in the brains of mice who have suffered a demyelinating injury that mimics MS.

Following the injury the researchers could see that the NPCs moved in very large numbers into the damaged white matter areas and converted, or differentiated, into myelin-producing oligodendrocyte cells. The contribution of the NPCs to restoring myelin greatly exceeded that of the oligodendrocyte precursor cells that normally sit throughout the brain ready to repair and maintain myelin. They were also able to show that the new myelin produced was thick and healthy.

Crucially, the team also showed that although the NPCs contributed enormously to repair in the areas closest to their resting niche, they were unable to differentiate to produce myelin in parts of the white matter further away. Further investigation of this finding may provide vital clues as to why myelin repair stalls in some parts of the brain in MS.

The team is now continuing to investigate the mechanisms that control the movements and differentiation of NPCs into myelin producing cells. They hope to harness this knowledge to develop new treatments that will stimulate and enhance repair in MS. 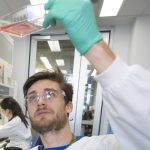 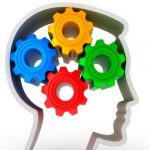