A new survey has uncovered a significant disconnect between supportive community attitudes towards co-workers with health conditions, like MS, and the reality of poor experiences within workplaces.1

Commissioned by MS Australia and released for World MS Day 2022, the findings show that while the general community overwhelmingly agree (83%) that people with health conditions in the workplace are ‘just as capable’ as anyone when it comes to working, over half (52%) of those with MS reported missing out on work opportunities due to their condition. More than a quarter (28%) of those with MS were uncomfortable in the workplace because they felt people labelled them.

The results also show that while eight out of ten (85%) in the general community believe workplaces are now more receptive to adapting roles to better fit employees, supportive action following disclosure is low. The findings showed one in five (17%) of those living with MS had their job description adjusted after telling their employer about their condition and one third (32%) saw physical changes made to their work environment to support them fulfilling their duties.

The ‘Employment and Workplace Survey’ gathered insights from 1,748 Australians aged 18 and over, including 525 people living with MS. It provides the first-ever comparison of our community attitudes with actual workplace reality for those with health conditions including MS, diabetes, arthritis, cancer, asthma, anxiety and depression.

Importantly, the findings reiterated a wide-held belief that meaningful work is a critical part of enjoying a good quality of life – with seven out of ten (70%) Australians feeling more connected to people and community because of their employment. This increased to over three quarters (77%) among those living with MS.

“This is a real concern because MS is a progressive disease often diagnosed in the 20s and 30s and most commonly in women, at a time when establishing a career and consolidating an income are important goals. The disadvantages for Australians with MS of not being able to find and keep suitable employment across their working life are well quantified.”2

Of concern, 3% of those living with MS, had their position terminated after disclosure to their workplace. On a positive note, three quarters (75%) of those living with MS and four out of five (80%) in the general community agreed that said flexibility and working from home have introduced a more level playing field for everyone.

Disclosure of a health condition in Australian workplaces is challenging, with the research uncovering more than two out of five (41%) living with MS who chose not to disclose their condition at work saying it would ‘change people’s opinion’ of them and one in four (25%) that it would ‘jeopardise career prospects.’

Experts in MS and employment, Associate Professors Pieter Van Dijk and Andrea Kirk-Brown from the Monash Business School, Monash University say although early and effective symptom management (for MS) is helping people to stay at work longer, there are a growing number of employees who feel vulnerable and insecure in their employment.

Fueling these concerns were nearly two thirds (62%) of those with MS not wanting to be viewed as likely to take more sick days and one in two (48%) thinking they won’t be seen as a ‘long-term team member to invest in and promote’.

Melbourne-based Disability Advocate/Actor Sonia Marcon, 40, and living with MS since 2002 says, “Outdated misunderstandings about MS and subsequent actions by employers, can result in those with MS being too fearful to disclose their condition. In turn, remaining silent can exacerbate their condition through overwork, or injury from an inaccessible workplace”.

When it comes to finding and retaining a job, nine out of ten (88%) Australians believe it is harder for those who have a physical or mental health condition to find a job. In addition, four out of five Australians (79%) believe they will also have issues retaining a job (80% of those living with MS agree).

While positive intention was demonstrated in three out of four (73%) workers living with MS who disclosed any health condition, areas for improvement were identified. For those living with MS, these included a desire for greater investment in built infrastructure (eg. ramps and accessible facilities) for 71%.

A need for better and more education and information was also apparent, with four out of five (82%) of the general community in agreement that knowing more about a person’s health condition would make it easier to work alongside them.

“Naturally we’re concerned those with MS and other health conditions are being disadvantaged, but also that employers are missing out on valuable talent, at a time when skilled staff are in short supply,” added Mr Greenland.

MS Australia is pleased to be able to share these findings on World MS Day, 30 May 2022. The theme for World MS Day is “Connections”.

Many people live and work well with MS, often helped by a disease modifying treatment that reduces the risk of relapses and disease progression; many experience debilitating symptoms that are often invisible to others; while some need assistance with their employment arrangements.

The launch of these findings renews MS Australia’s advocacy efforts in this area in line with our goal to “Challenge stigma in the workplace” as stated in MS Australia’s 2022-2026 Strategic Plan.

Each state and territory MS Member Organisation offers specialist MS employment services, advice and support to people with MS and their employers. This primarily includes a tailored approach to individuals living and working with MS to find the right solutions within the workplace and address barriers, to help people with MS retain employment. Specialist employment staff can assist with the adjustment of workplaces to suit the physical abilities of individuals with MS or discuss flexible work practices that will meet the needs of the person with MS and the business needs of the employer.

To find the service nearest you, please visit https://www.msaustralia.org.au/supports-and-services/

MS is the most common acquired chronic neurological disease affecting young adults, often diagnosed between the ages of 20 to 40 and, in Australia, affects three times more women than men. As yet, there is no cure. There is no known single cause of MS, but many genetic and environmental factors have been shown to contribute to its development.

In MS, the body’s own immune system mistakenly attacks and damages the fatty material – called myelin – around the nerves. Myelin is important for protecting and insulating nerves so that the electrical messages that the brain sends to the rest of the body, travel quickly and efficiently.

As the myelin breaks down during an MS attack – a process called demyelination – patches of nerves become exposed and then scarred, which renders the nerves unable to communicate messages properly and at risk of subsequent degeneration. This means that the brain cannot talk to other parts of the body, resulting in a range of symptoms that can include a loss of motor function (e.g., walking and hand and arm function, loss of sensation, pain, vision changes and changes to thinking and memory).

MS Australia represents and collaborates with its state and territory MS Member Organisations, people with MS, their carers, families and friends and various national and international bodies to: 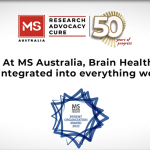